“The Long-Term Servicing Branch (LTSB) versions of Windows, including Windows Server 2016, don’t include Microsoft Edge or many other Universal Windows Platform (UWP) apps. These apps and their services are frequently updated with new functionality, and can’t be supported on systems running the LTSB operating systems.”

After checking the task manager I could see that I had several Windows Problem Reporting processes along with even more Microsoft Edge processes that were causing these errors. 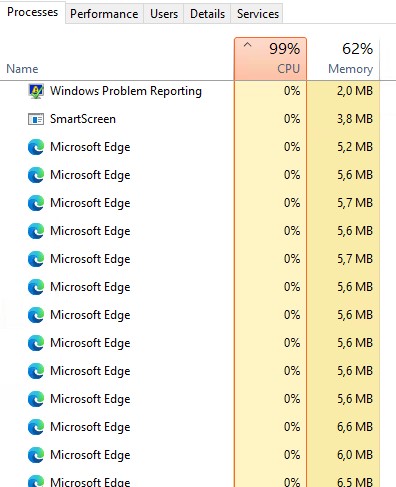 So, the problem lies in Windows Server 2016/XenApp/Microsoft Edge combo. After further investigation, I have discovered a Citrix registry key that can be used to get the Microsoft Edge working flawlessly on the XenApp VDA server. XenDesktop/XenApp 7.9 and later utilizes Kernel APC Hooking as a replacement of AppInit_DLLs used in previous versions of the products. This registry key already exists on XenDesktop/XenApp 7.14.1 and newer VDAs so additional applications can be appended with a semicolon delimiter.

Navigate to the following registry key:

From the right pane open UviProcessExcludes and add msedge.exe; to the end of the value data as seen in the screenshot below:

Close the registry editor and restart the server. Microsoft Edge browser should be working properly now.

Microsoft Edge for Windows Server 2016/2019 can be downloaded from the following location: https://www.microsoft.com/hr-hr/edge

A windows pop-up should provide you with the option to choose the proper version.