Its name is the Acer Predator 21 X. IT was revealed at IDF 2016 in Berlin, and it packs some serious gaming power. Its curved display clocks in at 21 inches, rocks a 2560 x 1080 resolution, coupled with NVIDIA G-Sync support and Tobii eye tracking just for the hell of it. 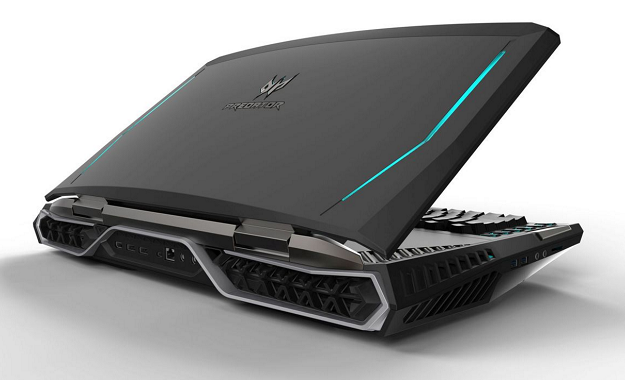 Under the bonnet the Predator 21 X is rocking dual NVIDIA GTX 1080’s in SLI mode, giving the player some serious gaming power. We should remember that the GTX 1080 GPUs have 2560 CUDA cores, a 1733 MHZ boost clock, and on top of that 8 GB of GDDR5X V-Ram running at 10GHz. To make sure nothing bottlenecks this beast, Acer has put in the latest 7th gen Kaby Lake processors for maximum CPU performance.

This laptops looks like something straight out of an Alien Movie.

In order to cool this beast, Acer had to come up with a good solution. The Acer Predator 21 X features 5 system fans, three of which are the metal Aero Blade fans that make optimum heat dissipation possible during demanding gaming sessions.  This was a pretty big deal for everyone, since most laptops get hot with normal operation.

And don’t think Acer has skimped on the Keyboard. Acer Predator 21 X features a full-sized RGB mechanical keyboard, coupled with Cherry MX switches for optimal tactical feel. The numerical pad is can also transform itself into a makeshift touchpad, so you really get a feeling that you are using something out of the future.

Acer has mentioned a Q1 2017 launch at the event, but we will need to wait and see if that holds up.