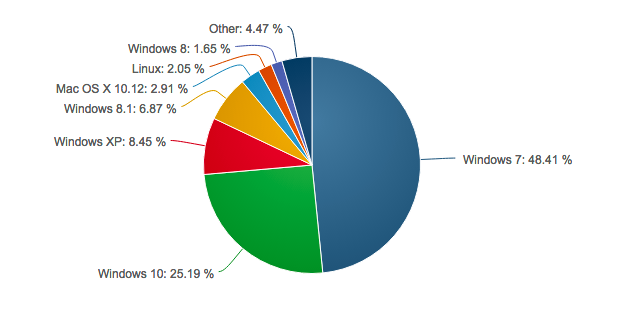 Operating systems from Microsoft still hold a huge percent of market share with 91.76%. Mac users are at 6.19% while Linux holds only 2.05% of market share.

Analysts had predicted that Windows 10 growth will be stopped in the consumer market once the free upgrade offer is over which was true but it will be interesting to see what will happen in the next 3 years once extended support for Windows 7 ends.

There were also predictions that Windows 10 could overtake Windows 7 by the end of 2017, but judging by these numbers this seems like a dream at this point. More concerning is the fact that a large number of Windows users still prefer Windows XP although extended support for this popular operating system ended back in April 2014.

It seems that governments and organizations could be delaying upgrade of Windows XP because of the new hardware requirements or because of incompatibility of their core applications with the latest operating system.

It’s worth mentioning that running Windows XP nowadays exposes your data to a high risk and that you should really consider upgrading your operating system, but many users still praise Windows XP as more stable, less invasive, more logical OS than any other Microsoft made.