EU Copyright Reform, Upload Filters, Article 13, and the Death of the User-Generated Internet

Long legal and political texts can be quite boring, but we have broken down the issue into smaller pieces, and are trying to present it here as entertaining as possible. So let’s have a closer look at Article 13, and its likely impact on large platforms like YouTube and Facebook, but also on comparably tiny platforms like WinCert.net. 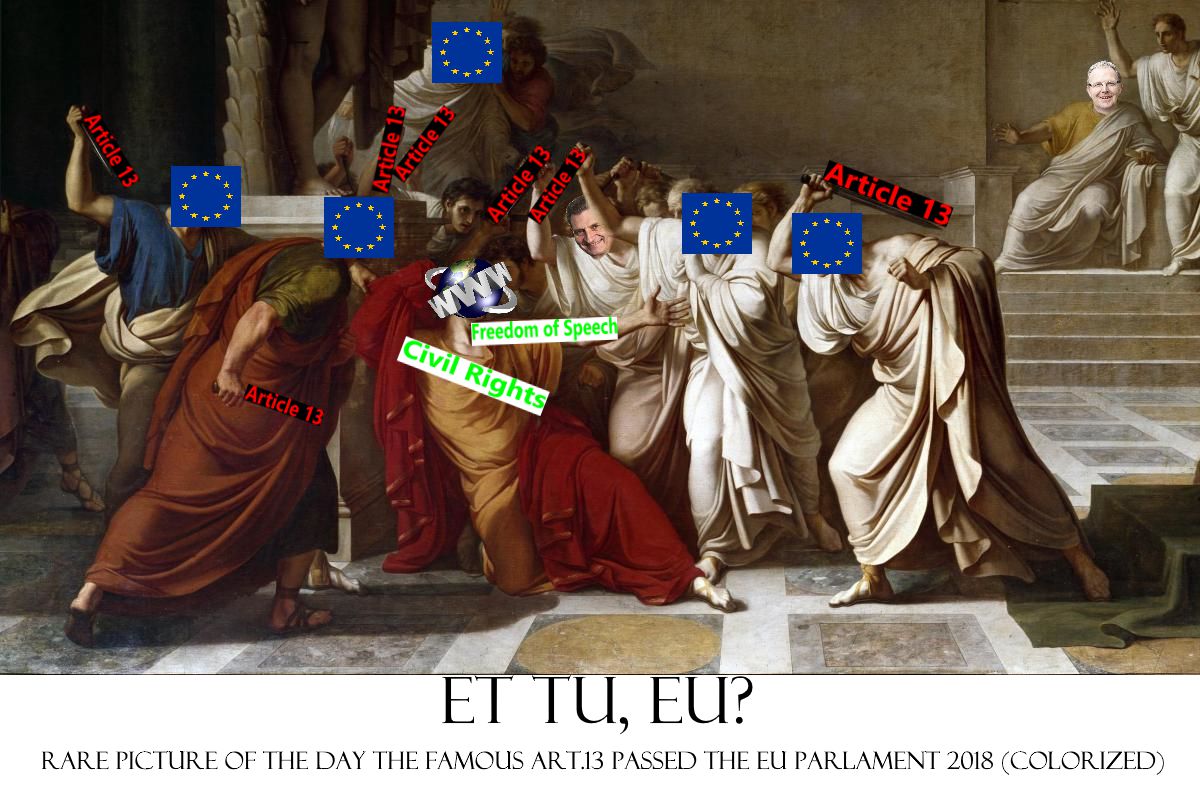 Article 13 regulates the use of copyright-protected content uploaded to online platforms by their users. It’s part of the proposed EU copyright reform. Paragraphs 2 and 2a of Article 13 read as follows:

2. Licensing agreements which are concluded by online content sharing service providers with right holders for the acts of communication […], shall cover the liability for works uploaded by the users of such online content sharing services in line with the terms and conditions set out in the licensing agreement, provided that such users do not act for commercial purposes.

2a. Member States shall provide that where right holders do not wish to conclude licensing agreements, online content sharing service providers and right holders shall cooperate in good faith in order to ensure that unauthorised protected works or other subject matter are not available on their services. Cooperation between online content service providers and right holders shall not lead to preventing the availability of non-infringing works or other protected subject matter, including those covered by an exception or limitation to copyright.

(The full text of the entire proposed law is available on the website of the European Parliament. A previous version of this post referenced an early draft of the law.)

The expressions in bold require further explanation in order to understand the impact of Article 13.

Online content sharing providers are all platforms that are made up of user-generated content, such as YouTube, Facebook, Twitter, Instagram, reddit, TripAdvisor, Pinterest, Google Play, Kindle, Airbnb but also thousands of tiny internet forums such as the WinCert forum. Platforms are exempt if they are no older than three years, have an annual turnover of less than 10 million euro, and less than 5 million users per month. Therefore, WinCert will be affected, because we’re older than three years, even though we’re miles away from an annual turnover of 10 million euro. Online encyclopedias, educational and scientific repositories, code sharing platforms, electronic communication services, marketplaces for physical goods and cloud storage services are also exempt.

Works are basically any kind of content, including video, music, images, photos and text; basically anything that can be copyright-protected, and in any way be uploaded to a platform.

Right holders are the publishers who originally created the copyright-protected content. Obviously, that includes large media publishers like TV networks, newspapers, magazines, and the music industry. Maybe that is what the lawmakers had in mind when they wrote up this text. Clearly, they forgot that rightholders also include hobby photographers, self-published authors, bloggers, and really any user who posts any substantial contribution to a web forum or to Facebook. So if taken literally (which has to be done with legal texts), any EU based platform has to enter an agreement with any creator worldwide.

Ensure that unauthorized protected works… (yada yada yada) is nothing but a fancy expression for upload filters. The requirement is, that protected content (which is almost any content) for which there is no licensing agreement with the respective right holders (which includes anything that can’t be positively identified to be licensed) is not (i.e. never) available on the service. This is only possible to do when filtering content at the time of upload. There is only one single upload filter in existence as of today, developed by YouTube, which can only handle video and music, cost close to $100 million in development, and doesn’t even work very reliably.

What’s the impact on the large platforms?

“YouTube and other platforms may have no choice but to block your existing videos and prevent you from uploading new ones in the European Union unless you can prove you own everything in your videos (including visuals and sounds).”

The average YouTuber will not be able to prove such a thing. Only the YouTube channels of big publishers like TV networks would remain. About non-EU based channels they announce:

“YouTube and other platforms will likely block your videos (including existing ones) to users in the European Union if there is partial or disputed copyright information.”

Again, the average YouTuber will not be able to prove that they own the full copyright of their content. So what will be left for us EU users on YouTube, Facebook, Twitter etc.? We will see the posts and videos by the big publishers only, and won’t have the ability to contribute anything at all, or to express our freedom of speech on these platforms.

What’s the impact on the small platforms?

It will be the end for small EU based platforms like WinCert.net, but you can be certain that we will not go down without a fight.

Since our future as a business depends on it, WinCert and all other platforms owned by HeiDoc will join the blackout protest on 21 March initiated by Wikipedia. For 24 hours, all of our services will not be available, including WinCert.net, HeiDoc.net, christiandiscourse.net, and wirbellosen-auktionshaus.com.

The Windows ISO Downloader will also not be able to generate download links for most of the products on 21 March.

We explicitly encourage all platform owners, no matter whether it’s a small or big platform, to participate in this protest, in order to reach as many as possible. Spreading the word of what’s going on is the best form of protest available. Mainstream media in Germany are only very reluctantly picking up the issue, although tens of thousands have been protesting on the streets. In other EU countries, this is happening even slower.

On 23 March, two days prior to the parliamentary vote, massive offline protests are planned, mainly in Germany, but in other EU countries as well.

What can you do?

Whether you’re an EU citizen or not, you can do the following:

If you’re an EU citizen, you can additionally do the following:

The best source for up to date information on Article 13 is Julia Reda, MEP for the Pirate Party, on her website, on her Twitter account and on Facebook. Any new developments are usually leaked by her immediately. If you understand German, another great source of information is the YouTube channel of Christian Solmecke, an attorney and expert on European law, and one of the fiercest freedom fighters against Article 13.