Unallocated or unsupported drive while restoring image with Acronis

Most of you are familiar with the advantages of SSD over HDD drives. SSD drive can breathe life into an old PC or laptop because for some time now the mechanical drive is a bottleneck of every machine.

One of my friends asked me to speed up his old Lenovo notebook, but because of the special software and customization of his system, he would like to avoid Windows reinstallation. With this in mind, I have recommended that we should replace the old mechanical disk drive with SSD drive.

The old drive was 2.5″ drive with 750GB storage space, although only 100GB was used. For this reason, we have bought an SSD with 250GB of storage space.

After I have made an image of disk/partitions of an old disk with Acronis software I have installed a new SSD and run into problems. During the restore steps when I had to select the destination drive, a new SSD drive was shown as an unallocated or unsupported drive. The problem was in the free space and since Acronis wasn’t able to resize the free space accordingly, I couldn’t do a restore of the backup image.

I have tried every single thing I could find online but nothing helped. Although none of the suggested procedures wasn’t helpful in my case, it could help you so I’ll post them here.

I have tried to:

Until now I was already mad enough with Acronis software so I have decided to search for free alternatives that might solve my problem.

The first application on the list was Paragon software which is “free” until you try to do something with it, then it kindly redirects you to buy the license. Then I have downloaded another free software that I have never heard of before. The software is called Macrium Reflect which offers a free home version that solved my restore problem!

Once I’ve made a backup with Macrium Reflect software I was able to select the destination SSD drive but I got a message on insufficient disk space. (Not all copied, insufficient space) 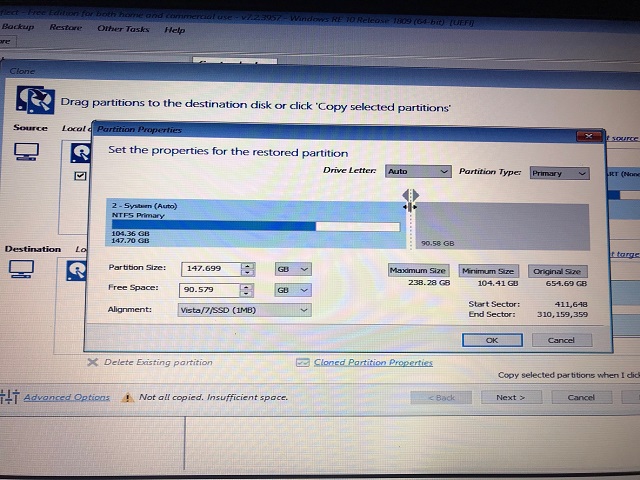 So I went to Cloned Partition Properties where I could resize the free space for the image being restored as you can see from the picture above. After the resize I was able to restore my image and once completed the system booted flawlessly with the new SSD drive.

Hopefully, this article will help some of you who is trying to restore the image of a larger drive to a smaller disk drive and runs into a same problem as I did.